It hurt more than I thought it would. It was bearable enough though. After a few seconds of pain he would let up, gifting an immediate moment of relief before he’d continue again. I felt so out of place in that room- surrounded by people and images that years of conditioning taught me to judge so harshly. Topless women, bleeding hearts, demons and gods— Tattoos, they said, defiled the body.

As a child, I remember Sunday School teachers asking, “would you spray graffiti on the walls of God’s temple?”

“No!” I’d answer confidently. Of course I wouldn’t. In all honesty, I wouldn’t have sprayed graffiti on so much as the side of a dumpster, never mind a sacred building.

“Well,” the teacher would explain, “God says your body is a temple. So if you’d never spray graffiti on God’s house, you must also never put graffiti on your body.”

Some parents at church would even frown upon those temporary tattoos that tempt all children, calling out from the 25 cent vending machines which were often situated beside innocuous bubble-gum dispensers. I remember scrubbing a conspicuous one off before church on more than one occasion, lest anyone get upset that I was meddling with the dangerous gateway-tat. 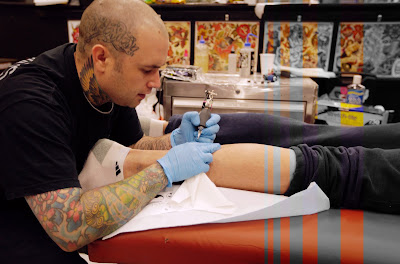 Perhaps they were right. After all, here I was decades later, the day after Christmas no less, feeling the piercing needles inject black ink into my virgin skin. I closed my eyes, because it felt safe, and I considered again this narrative I had so quickly adopted as a child. In truth, many of the walls in those temples were painted by artists who imagined landscapes and told stories with colorful murals both simple and complex. It was art. And so was this. I even designed it myself.

The story I had been told was meant to keep me safe, but it also taught me to see the world through a particular lens. Ink on bodies was graffiti, not art. It conjured images of delinquency and sin and ugliness and it shaped my attitude toward tattoos and the people who sported them. I realized, perhaps too old to proudly admit, that continuing to live by that script was infantile- like being a full-grown adult caged in a child’s playpen.

Somewhere along the way, in the recent years that led up to my lying face down on that tattoo parlor table, I realized that I had been living in a cage constructed out of hundreds of scripts like this one, written by the anonymous hands of countless strangers who lived before me. The moment I was born into these narratives, they became my own and and began to shape my reality. As children, we don’t have the tools to filter the information being fed to us. By the time we do acquire them, if we acquire them at all, we have already accepted the framework that threatens to cage us forever from any other possible reality. 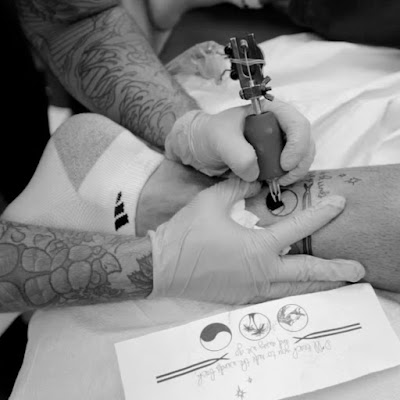 The tattoo was to remind myself to let go of all the assumptions and paradigms that I had adopted over the years and which created the illusion of truth in my life. To give myself to the wild and unpredictable wind and, like a dandelion, trust it to take me to new heights and fertile ground. To reconnect with that inner child who refuses to grow up, remaining unspoiled by the creeds of men and gods, and re-discover the universe through those young and simultaneously wise, ancient eyes.

“Away we go” became a part of my being that day in that dusty corner of Salt Lake City. It seems that somehow, writing in ink what was merely an idea was an act of creation that would bring forth my new reality. Coincidentally, a few days later, the wind picked up. And a few days after that, I loaded everything I owned into my car and began my 3-day, 2,000 mile drive across the country to more fertile ground. I didn’t know then just how significant those words would become in my life. But then, I suppose you can never be sure what lies ahead, when you give yourself to the whims of the wind.
Posted by Unknown at 2:25 PM No comments:

Email ThisBlogThis!Share to TwitterShare to FacebookShare to Pinterest
Labels: Away We Go, Reality, Religion, Tattoos 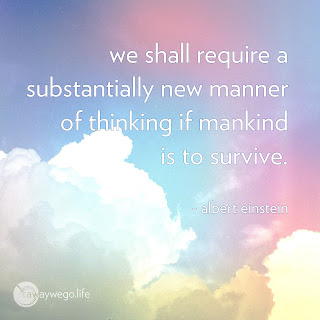